Call us at 1-800-848-3310 or email us: info@lincolnlogenterprises.com and we will work with you in the designing of a complete custom log home to your specifications. 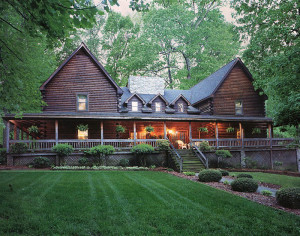 Each summer, it was the tradition that one week be set aside as vacation for the Faw family. As the father of four daughters, it was a time of sight-seeing, playing, eating, and joy… not to be interrupted by any other thing.

We were near our destination in the mountains of Tennessee when something caught my attention. “Look! There’s a log house. Let’s stop!” I suggested. My suggestion lost by a 5-1 vote.

As we settled in that evening, I could not get the log house off my mind. Especially since a “For Sale” sign was in the front yard. On the following day after seeing that mom and the girls were satisfied by the pool, I told my wife that I was going back to look at the log house. She simply rolled her eyes as I left for my visit.

I had never seen or been in a log house. Having seen pictures that were quite interesting was the extent of my knowledge of log houses. Little did I know that log homes would become a major part of my life until this very day some 48 years later.

The sales person was courteous but after hearing that I was just looking, he gave me some brochures and went back to the phone.

I began to make mental notes of the structure, inside and out. At that time, I had built two large homes as residences for my family. But, the log home was more unique.

However, there were some problematic features in this particular log home model that was of some concern. I later found out that all of the log homes at that time had the same problems. First, the logs were of different circumference size leaving ledges in the walls. Rain would fall on the ledges and seep into the walls and house.

Secondly, the logs were debarked pine trees and had a rough finish. Thirdly, the logs were cut in various lengths beginning with the “stump end” and gradually becoming smaller. This varying size of logs again gave way to water and air filtration ledges when stacked to form a wall.

Finally, the corner notches were obviously cut by a chain saw. The sizes of the corners were not the same.

Vacation ended and we returned home. But I could not get the log house out of my mind. I thought that there was probably a good market for the product. Initially I was interested in becoming a dealer or a builder.

I shared my interests with two acquaintances whom I thought would be good to involve in my log home interests. One was a builder and the other was an architect. Telling them about my interests (but not any of the possible problems), I suggested that we make the five hour trip to look at the possibilities. Neither of them had ever been in a log home.

Arriving at the same log home model that I had visited four weeks before, all three of us took about an hour looking over the house. Then, surprisingly they told me that they would probably be interested in a joint venture to sell the log houses. My question to them was, “How many should we commit to buy to resell?” We agreed on one a month for the next six months. All of us had good credit and could qualify to borrow the needed funds to get started.

I shall never forget the next fifteen minutes. We went to the salesman’s office and asked a few elementary questions. Then we told him that we wanted to buy six log home kits.

He dropped his pencil and pushed away from his desk and asked when we wanted them. “One per month for the next six months,” was my reply. He looked as if someone had just slapped him in the race with a soaking wet towel. He replied, “Gentlemen, I cannot deliver the first kit for 10 month. We are that far behind.” I then asked if he could recommend someone else in the log home business.

He sent us about 20 miles to another log home company. It began to rain. Standing in the living room of the log home model, we watched as water ran down the inside of the walls. Nevertheless, we made the same request of the salesman in charge. He told us that it would be 12 months before he could deliver the first house.

We left and ate lunch and headed back to Kannapolis, NC. I was riding in the back seat. Halfway back I declared to the other two me, “If there is a waiting list for these log home kits, we are approaching this endeavor the wrong way. Instead of selling, we should manufacture these log homes.” Although I was very serious, they both laughed and said “Count us out!”

For the next week, I tried to find out more about the manufacturing of these log homes. Finally I discovered that the log home manufacturing plant for one of the houses that we had seen was only 60 miles from my house. The next day I went to the facility. There was no office however a large metal building housed the manufacturing process. A chain link encompassed 3 or 4 acres.

I walked through an open gate and casually entered the manufacturing area. No one asked me anything. They just nodded and I returned the nod.

I watched as they brought in logs of different lengths and debarked them. Next, they cut the logs to the size wanted and then ran them through a large table saw (with two blades) making a flat surface on top and bottom of the logs. A worker with a chain saw notched some of the logs for the corner sections of the house. The result was a debarked (not smooth but rough) log cant of different widths and rough, chain saw cut notches. There had to be a better way.

What would the ideal 6”x8” log be? First and foremost, the surface of the log would be smooth. Secondly, the diameter of the logs would be the same. And finally, a better corner had to be developed. Why had no one attempted to do that? To this day, I know not why.

I found a solution to all of the problems besetting the log homes on the market in 1974. Instead of simply debarking a log that varied in size from 5” in circumference to 10” at the butt end, I searched for a timber supplier to sell me rough sawn cants, all of the same size, 6 1/2” x 81/2”. A large Neuman planer was purchased to shape the rectangle cants into a smooth 6”x8” log. No one had ever tried this.

The top and bottom straight blades were no problem. The blade would have to be air dried hardened to keep its cutting edge sharp. The questionable factor was that each blade would be cutting a much larger amount of wood from the cant…almost 2” morethan anyone had ever attempted.

The planer was installed, along with powered feed tables to feed the cants into the planer and roller tables to receive the shaped log as it exited the planer. At this point I stopped. Before putting the Neuman planer to the task, I decided to call the Neuman office in Greensboro, NC asked for one of their engineers to come and look at what we were attempting. He came and I told him the plan. The engineer stared at me and asked “ Who told you that you could do this?” My answer was “The Lord.” I had to be honest.

I had repeatedly prayed for the Lord’s help. As my crew of four and I stood there, the engineered warned me, “Do not tell anybody that I said that you could do this. You’re going to get somebody killed!” He was referring to the possibility that the side blades would shatter throwing deadly pieces of metal in all directions. The engineer turned and walked quickly to his truck.

What now? I told the crew to ready three cants on the feed table to run through the planer. When in place, we formed a circle and prayed. Then I told them to leave the plant area. After they were a safe distance away, I started the planer. When it reached the proper rpms, it was time to start the feed table which would push the log cants into the planer for shaping. I watched as the planer took hold of the cant, shaping it in the form of a log and pushing it through to the awaiting table.

The first time, with no hesitation and no indication of any strain on the planer, a 6 1⁄2 “ x 8 1⁄2 “ yellow pine piece of wood 12’ long was perfectly shaped into a 6”x8” log which the feed rollers of the planer delivered to an awaiting table. The thrill of seeing this was beyond description. I then ran another and another 12’ cant. All three were exactly the same and something to behold. The crew ran back into the plant area clapping and shouting and hugging each other. The Lincoln Log Home log was born.

There was yet another accomplishment to be attempted. I found a used 25hp motor, had a local shop smith to manufacture an 8” diameter Fortner drill bit to cut into the log approximately 4” deep. This formed a log shaped cavity to receive another log forming a perfect interlocking corner. We were looking at a smooth, perfect shaped log with interlocking cuts for the corners. It was a first for the industry.

With manufacturing in place producing a fantastic product, to be successful there was yet another key element which must be put into place. Marketing! There must be a marketing program which would be capable of selling a great number of these log home kits.

It was at that time that I met Richard Shoff. At the time, he knew little about the log home industry. However, I persuaded him to become a part of our efforts. He agreed. Lincoln Log Homes was formed.

Richard Shoff proved his ability as a marketing genius as he developed a dealership program which immediately took shape. To say that the Lincoln Log Home marketing program was a success would be a huge understatement. One has only to look at the record.

So, you have seen the unlikely beginning of a most successful venture. The story of Lincoln Log Homes will not likely ever be repeated. However it remains an opportunity for the average man on the street to become a dealer believing that he can also learn from and realizesuccess with the help of those who know how to lead….those who have walked the walk before. This is the story of Lincoln Log Homes….. a story that you can be a part of.

Experience the joy of making your dreams come true! OVER 48 YEARS OF SERVICE